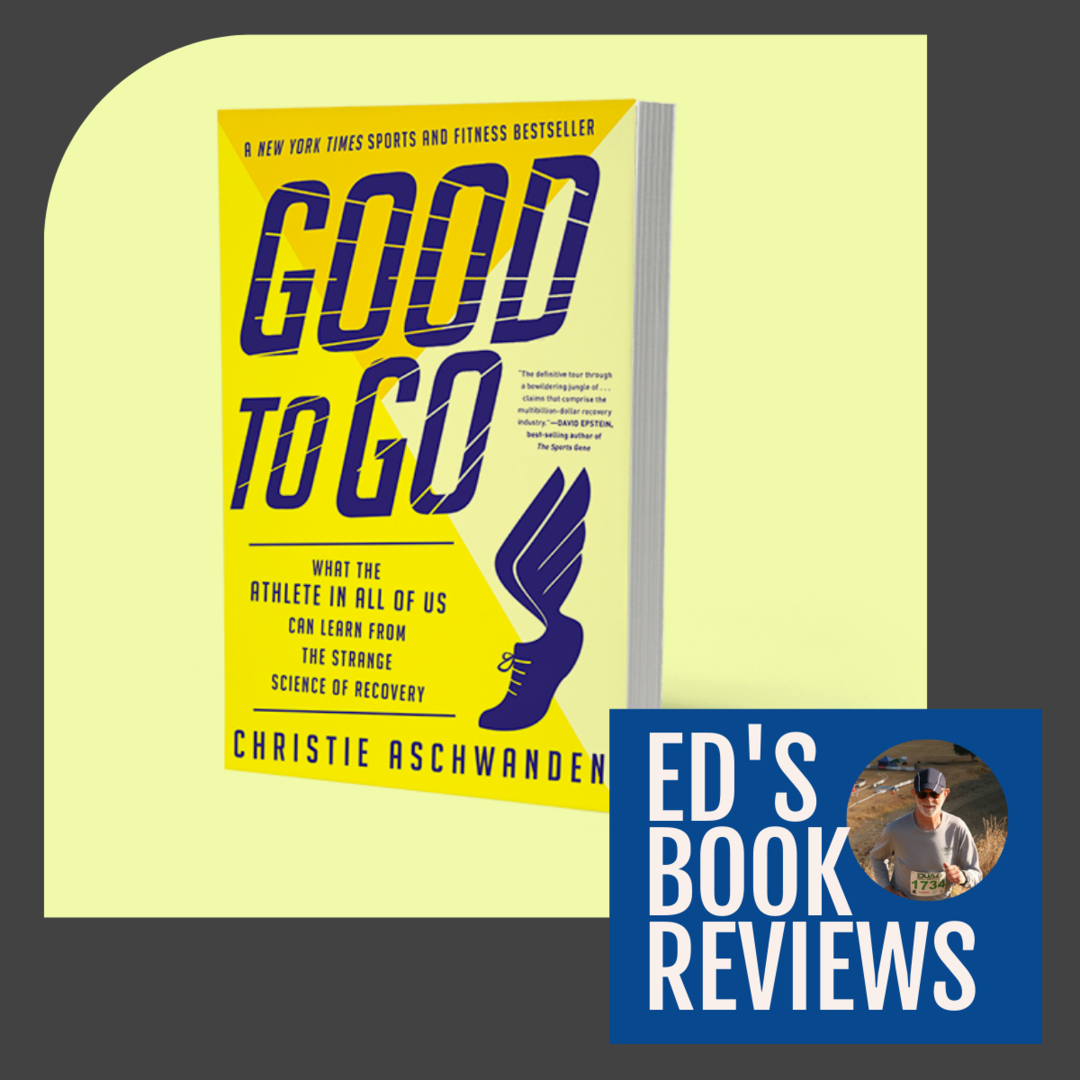 Book Review: Good To Go - What the Athlete in All Of Us Can Learn from the Strange Science of Recovery

You may have heard any or all of those answers recommended to you by coaches or found them on the internet over the last several years. I did, and I followed the 20 to 40 minutes routine faithfully with a protein shake which included “hormone-free whey protein isolate in an ideal 3:1 ratio.” Of course, all the benefits listed on the container were followed by the ever-present cover-your-glutes disclaimer saying that the FDA hasn’t approved any of the statements. (Watch out for those “pesky” asterisks, as the author calls them.)

So, whom to believe? I recommend Christie Aschwanden and her science-based conclusions in Good To Go: What the Athlete in All of Us Can Learn from the Strange Science of Recovery (W. W. Norton & Co., 2019) over the hype and hysteria of the likes of Gatorade, infrared sauna floggers, and supplement pushers ad nauseum. Case in point is the answer to the quiz. It’s not so much a window as it is “an anabolic barn door” according to Brad Schoenfeld, director of the Human Performance Lab at CUNY Lehman College in the Bronx. He and his colleagues did a meta-analysis of the research behind the narrow window idea and found all kinds of flaws in the studies. Now, no one is arguing that you don’t need protein, but as long as you eat breakfast, lunch, and dinner, it’s almost impossible not to get through that barn door. And that door stays open four or five hours, maybe more.

But Good To Go offers a lot more in it than “this study says this and that study says that.” How about the author’s own “research” with her buddies into whether beer is not just a good thirst quencher after a run, but could be a recovery drink? Her conclusion: Sorry, guys, not so for you, but for women? Yes! Ummm…Maybe. Which is what a whole lot of sports research ought to state because that’s what the data says. But, sadly, too much of the research is funded by, just as an example, GATORADE! No doubt you are not shocked that data compiled by those being paid by Gatorade concluded that their yellow or blue or orange concoction (i.e., water, sugar, and salt) is a miraculous beverage —electrolytes— which will build your body eight ways and take out the garbage.*

For you, the athlete, however, there is so much more. Aschwanden, an award-winning science journalist and life-long competitive athlete, covers just about every recovery strategy out there and gives you the low down. When something has value, she’ll fill you in. But for those with less than demonstrable benefits, she’ll tell you why, save you the time, effort, some cash, and most importantly, give you the confidence that you are doing what research says works and doesn’t work.

An example: Chapter 8, “Selling Snake Oil,” takes us on a visit to a GNC store. (Careful! Pesky asterisks abound.) First, Aschwanden points out how little knowledge the salesperson had of the products. Next, there are the product claims such as “work(s) synergistically with the body’s own mechanisms of renewal” and “pinpoint accuracy on the body’s reservoirs to build and replenish.” Aschwanden’s comment: “Whatever that means.” So for $55 (about $4 per serving) do we really need the “GNC Pro Performance® Amp Amplified Wheybolic Extreme 60™”? Well, no, but there’s an interesting dynamic here: Fear Of Missing Out. We’ve all gone through it in some form. Am I doing all I can to hit my goals? What’s my competitor doing that I’m not? Will my coach think less of me if I don’t? Plus, coaches push athletes for the same reasons. Yet we find out that we don’t need to haul around all that baggage since everything we need is available in another store — the grocery store!

In fairness, Aschwanden gives the supplement folks a chance for some input. And they do have a point when they say that some athletes just don’t eat properly, while others exercise well beyond even the most avid, like bodybuilders. So, yes, there is a place for a reasoned regimen of supplements. This comes from Jose Antonio, CEO and co-founder of the International Society of Sports Nutrition and an acknowledged supplement guru. Antonio says, yes, especially in the old days, there were hucksters, but he says many were getting it right. Sometimes you just need more protein, for example. And here’s another “secret” Aschwanden got from Antonio when, expecting a long list of supplements when she asked him what he recommends for recovery, he said, “One…sleep. There’s lots of data that you just need to sleep a lot.” Antonio also recommends 20 to 40 grams of protein post exercise, and some carbohydrates to replenish muscle glycogen if you’re an endurance athlete. “If you stick to the basics you’ll do fine,” he told her.

Another example: Chapter 5. “Flushing the Blood.” Aschwanden reminds us that blood is “the body’s great delivery system. It helps get recovery done.” It shuttles exercise’s metabolic by-products away from tissue and delivers repair molecules to where they are needed. It also delivers oxygen to cells and glycogen to depleted muscles. But what about getting the lactic acid out of our muscles? Well, research by Dr. George Brooks of Cal-Berkeley says that lactic acid is not responsible for the burn in your legs after hard 400 meter intervals, nor does it make muscles sore after exercise. In fact, “lactate may actually provide a fuel for muscles in some cases and may even help trigger the production of new mitochondria, the structures in cells that produce energy.” So, how to move that blood? Heat can help; the problem is, which strategy out there is truly helpful and which isn’t? How about an infrared sauna? Meh. Compression pants? Maybe. Pumps? Ha! Well, how about a massage? Yes! Shona Halson, a recovery expert, says a massage can be effective for performance if the recovery period is short—up to ten minutes. But there’s no evidence the benefit comes from moving out the lactate. Besides, unless you have another race coming up in an hour and a half, there’s no need as the lactate will clear on its own. But why not treat yourself? And that brings us to our last example.

Chapter 11. “Hurts So Good.” This chapter alone is worth the price of the book as it gets into the mindset of athletes, placebos, motivation, and whether those who practice these recovery modalities have a performance edge. Aschwanden leans toward “not so much,” but there is so much else here that actually says that the properly researched techniques and products “used as directed” can indeed help you to achieve your goals. The fun —and fascinating— part of the chapter, however, delves into placebos. Here’s the key: People tend to dismiss placebos as a synonym for ineffective, when, in fact, “these effects are real, and in some cases can be as powerful as many drugs.” The mind is where it’s at.

Conclusion - Worth the Read, but We're Left Wanting More

What’s frustrating in reading about these topics — and it’s no fault of the author who makes the point over and over — comes from finding that there’s no conclusive evidence about some of these issues; that “the study was inconclusive.” That’s a good warning in some cases, but it does leave us wanting more of a conclusion. It’s also disheartening, well, actually quite maddening, to read how so much of the research isn’t research, but is “thin and incomplete” or worse, “comical.”

Yes, science is inexact. And though it’s hard to get a scientist to say more than his or her research “suggests” a certain outcome, it may well work for you. After all, you and I and everyone else is unique, so maybe, placebo or not, if it works for you — It works!

As a Master Instructor of the energy efficient and injury elimination techniques of Chi Running and Chi Walking, Ed has been teaching beginners, recreational athletes, and Western States qualifiers in both group and private sessions for over ten years. He's raced at all the distances up to marathon, including Boston, but now focuses on trail halfs. He lives in Aptos, California.
Website: https://runwalkcoach.com/